Time For an Article About How Wendy's Has Made Me Angry 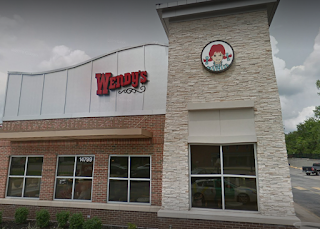 I will never eat at the Wendy's near our house ever again. I will still eat at other Wendy's restaurants, but the one near our home has angered me to an absurd degree that I'm going full-on Karen, as the kids say. You see, I may live in one of the safest cities in Missouri, but I feel outright robbed by that Wendy's. I tried to handle everything in a respectable manner without going online and complaining as us David's apparently like to do, but all other options are exhausted and I shall use my very public platform to discuss how a fast food restaurant did me wrong.

It was April 19th of 2022 and I went to the Wendy's located at 14799 Manchester Road. I had ordered in the Wendy's app so that my order would hopefully have zero chance of being messed up. When I arrived there at 6:45 PM the line was crazy-long. That was okay, I know stores are short on staff so it is important to be patient. I waited in the drive-thru line (nobody was allowed inside the location and it was drive-thru only) and got to the order box. I told them my order and was informed I needed to pull up a bit so they could bring it to me when it was ready. After waiting some more my food was brought out. I had ordered two drinks and a Frosty. I was only given one drink and a Frosty but before I could say anything the employees had run back inside. It was 7:35 PM or so by this point and the store was set to close at 8PM so I just shrugged and figured that would be the only mistake, perhaps. I was wrong.

I got home and my wife's nuggets were missing, my chicken sandwich was totally wrong, and the drink that we did get was not even correct. Half the order was incorrect or missing. At this point, Wendy's was closed so I figured I would go the next day to tell them what happened and they'd be happy to fix everything. I was soon to learn that I was wrong yet again.

The next day I went to Wendy's after I dropped Clarkson off at school. I drove up to the order window and told them how I had placed an order in the app, came to get it, and that a big chunk was wrong. I said I could show them the app if they had any questions. They asked if it was a Doordash order and I explained that no, it was me in the app. They asked if I had gone back to the store yesterday or called. I clarified the store had already closed by then. I was told that because I hadn't made the problem known yesterday or called even if the store was already closed, I was out of luck. I was surprised to hear this because you know who fixes problems near our house if something is wrong? Basically any other fast food store near us. If I go to the McDonald's near our home at 15204 Manchester Road and inform them an item was forgotten or messed up, they offer to replace it or give me a gift card. I always have the receipt, but they say it is all good if I offer to give it to them--they just help me. Wendy's did the opposite.

I did some Googling and eventually found the number to call Wendy's hotline. I called and after holding for some time got a human. I explained everything that had happened so far to them. They said they could refund me the value of the items in the app or could inform the general manager at that specific Wendy's so that the manager could call and talk with me. I said I'd be happy to talk with the manager so I could discuss with them what had gone wrong and how things could be improved in the future. It has been a number of days and no manager has called from that Wendy's.

I can only conclude that whoever is running the Wendy's near my house doesn't care that a customer is upset. They didn't know this customer had a blog that attracts a significant number of readers every month who enjoy pop-culture ramblings. They also didn't know that I'm perturbed enough to call out this specific Wendy's and then tweet the corporate account so they can be aware of how disappointing this specific location is. As I said, I'll still eat at Wendy's but don't expect to ever see me at that location closest to our house ever again. I'm far too petty, and I will admit that. I would still encourage people to eat at Wendy's restaurants that are near them, but if you're ever in my area and see this specific Wendy's, just keep driving up the street to the McDonald's is what I'd suggest.

Posted by David Charles Bitterbaum at 11:29 AM