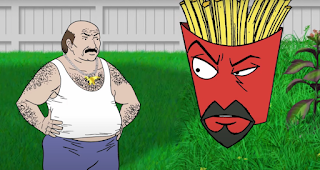 Between Kendrick Lamar announcing a new album, the trailer for the next Thor movie, and what I'm about to report on here, today has been a good day for me regarding news about entertainment I enjoy! You see, it has been over seven(!) years since any kind of new content featuring the Aqua Teen Hunger Force (and friends). The series had a movie, changed its name off and on, and was always off-the-wall weird. When I met the voice of Frylock, Carey Means, at the 2021 Big River Comic Convention he hinted that something was maybe in the works (but couldn't say more). Then, less than a month later Adult Swim announced some cool projects were in the works, including new ATHF content.

Now we have, "Aquadonk Side Pieces." There will be 10 one-shot shorts featuring various, "Famous," and, "Popular," characters from the ATHF mythos. As Polygon explains in this article, "Adult Swim will release a new episode of Aquadonk Side Pieces every day from today until April 17 via the network’s official YouTube channel, with each episode premiering at 12:00 p.m. EDT. The as-yet-untitled Aqua Teen Hunger Force movie sequel is slated to release sometime this summer." I do indeed wonder if there will be a big announcement on the 17th about the movie. One can dream, eh?