I Tried Subway's BBQ Rib Sandwich and Have Thoughts 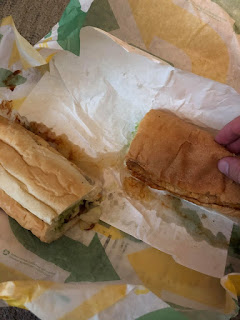 Subway recently called-out McDonald's a little bit with its own new BBQ Rib sandwich designed to look like and basically be a competitor to the famous McRib. The McRib, of course, is only available at certain points, so it isn't a direct competition right now. Still, shots fired on Subway's part. I decided to give it a try, but I got it the same way I do a McRib--no pickles or anything. I did leave the lettuce on it Subway offers, as it is important to get your veggies in. Having tried Subway's BBQ Rib sandwich, I can say I liked it.

Subway's sandwich tastes a lot like a McRib, which I think is the point. It is bigger than a McRib (if you get a foot-long) and decently filling. I found it not overly saucy, but well-balanced and just quite solid all-around. I'm not going to say it is better than the McRib, but it is comparably tasty. If you have a hankering for a McRib it fills that void handily, and it good judged on its own merits as well. A good sandwich, all-around, in other words.
Posted by David Charles Bitterbaum at 10:15 AM