The New Issue of, "LAAB," Has Launched its Kickstarter 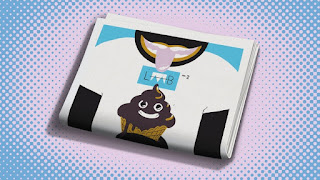 Beehive Books is a smaller publisher that has created a number of cool things. They did that unique take on, "Dracula," last year and have been running a comic-focused newspaper that's been getting a lot of buzz  called, "LAAB." It's third annual issue (which is issue #2 as there was a zero issue) has launched its Kickstarter and you can check it out now. This issue's theme concerns food, waste, soil, and sustainability. It has a who's who of creators such as Paul Pope, Michael DeForge, Olivia Fields, and more.

There are comics, articles, and you can back it for digital copies of past and present issues as well as physical copies. Beehive Books always makes good stuff and, "LAAB," has gotten tons of critical acclaim. I look forward to this latest issue being funded (I assume) and entertaining everyone! Here's the link to it again should you want to take a look and possibly back it!
Posted by David Charles Bitterbaum at 3:17 PM