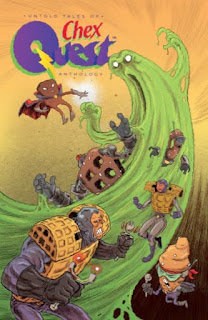 "Chex Quest," was a computer game from 1996 that promoted--what else--Chex. It has apparently been remastered and can be played for free if you have a computer. There is a free, "Untold Tales of Chex Quest Anthology," comic that came out recently and can be found at comic shops that got it randomly with their shipments. For a comic that ties-in with Chex this thing is astoundingly cool.

It is a thick comic, with a spine like a little book, and it has some great talents involved. There are folk I don't know, but then some names that are incredible creators such as Tom Scioli. I have a soft spot for commercial tie-in comics, having loved the, "Mighty Bubble," comic I talked about some years ago, but even if you aren't a big follower of random comic tie-ins this is a wildly cool book. The, "Untold Tales of Chex Quest Anthology," is worth seeking out a physical copy of or reading online. It's fun, creative, and makes me want some Chex mix or cereal, so cross-promotion mission accomplished, I suppose.
Posted by David Charles Bitterbaum at 10:41 AM