Film Friday: Ben Affleck Actually Back as Batman? What a World We Live In 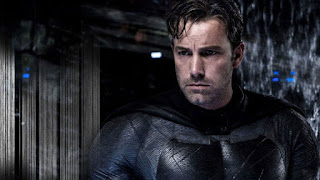 Ben Affleck was done as Batman, he hated it....right? Well, in the upcoming, "Flash," movie that apparently will riff on the event, "Flashpoint," Ben Affleck will be one of the Batmen back for the role (Michael Keaton is confirmed and who knows if anyone else will pop-up). "Flashpointt," was all about time-travel and multi-dimensional shenanigans so this is a way for Warner Brothers/DC to basically say all their movies are, "True," in some manner. From the Zack Snyder stuff to, "Joker," to the upcoming Robert Pattinson Batman movie to the television shows which the movie-Flash, Ezra Miller--actually had a cameo in too.

It's a wild idea to just bring everything and the kitchen sink together, but DC seems to be considering this idea as opposed to trying to have a tightly-knit cinematic Universe as Marvel does. They were able to convince Ben Affleck to come back, so clearly he agrees with the idea to some degree. I look forward to seeing more as this all develops.
Posted by David Charles Bitterbaum at 11:28 AM