"Atlas At War," Provides a Fascinating Look at War Comics of the Past 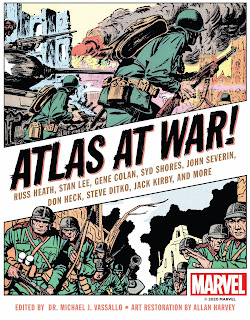 The lengthy introduction to, "Atlas At War," by the book's editor, Dr. Michael J. Vassallo, is careful to point out that so many war comics were produced during the '40s and '50s (before somewhat fading away) that there is enough material for arguably 4 more think books after this impressive tome. I don't doubt it, but what is contained within, "Atlas At War," is a fantastic overview of war comics in the past. A joint publishing venture between Marvel and Dead Reckoning, "Atlas At War," is full of war stories from WWII as well as the Korean War, some pre-code and more visceral, others from the post-comic-code era that resulted in stories being a bit more watered-down (in all comics, frankly, not just war). It's a big and stellar read.

"Atlas at War," tries to identify creative teams as best it can, but credits weren't always the most detailed in comics decades ago. Therefore, while some amazing creators are noted (Kirby, Ditko, Heath, Colan, and so forth), a number of comics are left a mystery who may have been involved in their creation. The tales are all impressive in their mixture of pro-war propaganda, tales of the horrors of war, and some tales that are pretty politically incorrect by today's standards--as also noted by Dr. Vassallo as these are of course products of their time. One reason everything looks incredible is due to the amazing art restoration done by Allan Harvey, who deserves immense praise. 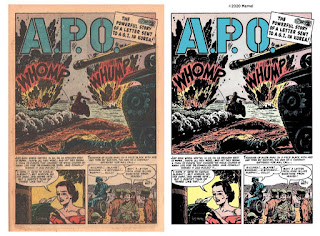 These are comics from more than half a century ago. Heck, in another 20 years it will have been a whole century. That means many of these original comics are torn-up, weathered, faded, and otherwise past their prime in appearance. However, everything within, "Atlas at War," is fantastic thanks to some amazing art restoration done by Allan Harvey, as can be seen above. There is a certain charm to reading these old comics in their original form, warts and all, yes, but being able to see the skill and hard work of the creative teams in crystal-clear detail is glorious and Harvey's restoration is arguably what makes these reprinted tales of a war a must-have for anyone with an interest in old war comics, or comics in general.

"Atlas at War," is a phenomenal look into the past at how the once-booming business of war comics resulted in some amazing talents writing and illustrating tales of combat. It contains stories that still strike a nerve today in their messaging and the restoration by Allan Harvey drives-home every panel of explosions, whizzing bullets, and muddy battlefields. This isn't just an amazing collection of comics, it is a fantastic piece of comic history.
5 out of 5 stars.
Posted by David Charles Bitterbaum at 11:07 AM