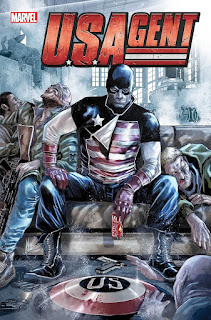 Christopher Priest is an amazing writer, and he excels at taking characters I have never really read comics about and making me love them. He did it with Deathstroke, he did it with Vampirella, and now he's going to do it with a mini-series for U.S. Agent of all characters. Yes, Christopher Priest is going to be bringing us five issues of, "U.S. Agent," from Marvel and I'm totally here for it. John Walker is U.S. Agent, and kind of a jerk--a lesser version of Captain America. I find the character often is grating when he appears in assorted comics and I don't care for him much. I'm sure Priest is gonna make me love reading about him though.

Priest himself knows Walker is pretty awful, saying in the official announcement, "I was thrilled to be invited back to Captain America...until I realized it was this guy, Cap’s scowling, emotionally damaged misfit cousin. Cousin America. But USAGENT presents an exciting writer’s challenge to explore the myriad expressions and aspirations of the American dream, how that dream is fulfilled or not, through the eyes and voices of a nation often at war with itself. John Walker is a man often at war with HIMself, so Marvel knows no better a protagonist for this journey, this stumble, this Parkour carom through the many visions of the greatest nation on Earth.” Yeah, I'll be buying this, even if I'm not super familiar with the artist, Stefano Landini, I'm sure he'll do great too.
Posted by David Charles Bitterbaum at 9:56 AM