"What The Golf?" is as Fun to Play as it is Hilarious 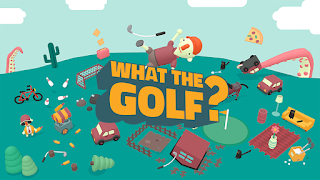 "What the Golf," is a video-game that advertises itself as, "The golf game for people who hate golf." This is pretty apt as it is kind of a golf game, but often not. Sometimes you hit  golf ball through wacky courses. Other times you are suddenly playing a riff on, "Flappy Bird," or throwing couch off a cliff. Then you might enter a Super Mario homage, have your ball turned into one used for soccer, or fling your ball around with a slingshot a bit like, "Angry Birds." Oh, then you might fly around space, fly around an explosive barrel used to blow-up trees, feed some cats hotdogs, and basically do anything but play a regular round of golf.

"What the Golf," isn't just simply wacky, it is full of clever game ideas too, and a bit tricky at times as well. Right as you get the hang of one style of gameplay it goes and switches things up on you with a whole new motif for you to, "Golf," within. You might go from carefully rolling a vase of flowers around obstacles to being a cow fighting off other livestock for the right to binge a television show in the span of a handful of minutes, with, "What the Golf," never running out of ways to keep things fresh over its wide-ranging number of levels (which I'm not quite done with, but have had a stellar time playing on the Nintendo Switch so far). It's a wild time. 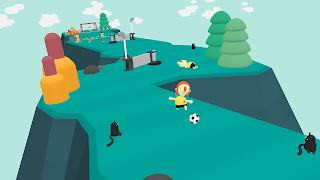 "What the Golf," is barely a golfing video-game, and that probably why it is so darn fun. Between the clever level design and sharp sense of humor, I've been able to laugh at jokes and grit my teeth with determination when faced with a more difficult level. I recommend, "What the Golf," to anyone interested in a wacky title--whether they love golf or absolutely hate it they'll have a ball (pun intended).
5 out of 5 stars.
Posted by David Charles Bitterbaum at 2:32 PM

Email ThisBlogThis!Share to TwitterShare to FacebookShare to Pinterest
Labels: Nintendo Switch, rant-reviews, video-games, What the Golf