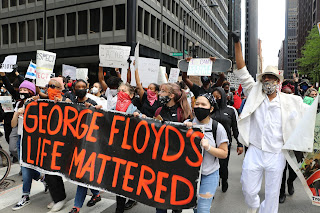 The powder keg that is America ignites again. As many would tell you, from the start of its inception America has treated black citizens as second-class citizens at best, little more than property via slavery at worst. Attempts have been made to address these centuries of injustice through peaceful protest, violent protest, and even the gentlest attempts to state, "Look, can't you even agree this isn't right?" It seems to often fall on deaf ears, however, with people, "Tut-tutting," when Colin Kaepernick protested police brutality in the most peaceful and low-key way possible, and then these same folk complaining, "Why can't they protest peacefully?" when the walks and chants do little to grab attention.

I don't approve of riots, of looting, of mayhem. I also can see that Dr. Martin Luther King Jr. was right when he said how a riot is the language of the unheard, and this was a man whose whole model of protest was via peaceful protest. We have a judicial system that over-punishes Black boys, girls, men, and women. We have a police system that has been allowed to run unchecked as it murders these individuals with no consequences. We have a President (Trump) who unwittingly quotes a racist police chief from the 1960s encouraging the shooting of protestors whilst calling them, "Thugs." This, when a week or so ago he was calling White people protesting their desire to go to Applebee's or get a haircut in the era of COVID-19, "Fine people," as they stood outside buildings with their guns yelling about the dumbest stuff possible to protest.

Protests are breaking-out nationwide, some turning quite violent. It is tragic things have gotten this bad, but anyone who claims they didn't see it coming is either lying or incredibly ignorant. His name was George Floyd. His life mattered. The lives of all the Black individuals killed wrongfully mattered. I'm not surprised that all this injustice has resulted in a crisis. I'm surprised this didn't happen sooner.
Posted by David Charles Bitterbaum at 10:32 AM