Mafia Was a Fun Game, But It'll Need a Lot of Work for a Remake/Remaster

This article by John Walker at Rock Paper Shotgun observes he has fond memories of playing 2002's game, "Mafia." He also discusses how revisiting it now shows how infuriating it could be at times with wonky controls, a messed-up saving system, and so forth. I quite liked, "Mafia," when I played it years ago on the PC (and yes, I feel old realizing this game first came out 18 years ago), but I recall it being quite a pain at times.

The plot was fine as a mish-mash of old-timey mob movies riffing on the 1920s and 1930s when prohibition was in full swing and there were some standout moments, but yeah, things could be a pain. Cars (somewhat intentionally for the era) handled horribly, the in-game map was never helpful, and difficulty levels could vary wildly from mission to mission to a degree things seemed like a cakewalk at first before you were cursing and restarting a mission for the 8th time. 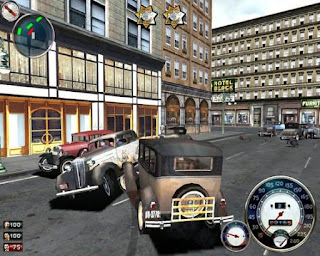 There was some definite fun in, "Mafia," but to make it work now in the modern age you really need to tweak it. Maybe add an open-world element as it had a massive map but everything generally was a bit on-rails with you going mission-to-mission as opposed to just having a jaunt in the past. I found, "Mafia II," solidly fun if also at times enraging with the driving in particular, and never got around to playing, "Mafia III," which got really mixed reviews. All the games are getting updated to some degree, but the first, "Mafia," will clearly need the most work to be especially fun all these years since its initial release. If things work out well, however, it could be a pretty great time.
Posted by David Charles Bitterbaum at 3:15 PM