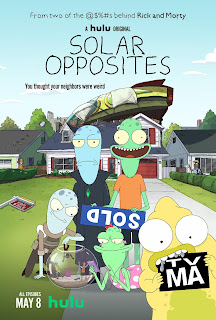 It feels odd to thinks of a show with as much gross-out humor, violence, swearing, and weirdness as, "Solar Opposites," as being optimistic and kind, but again, we're comparing it to its thematic cousin, "Rick and Morty." I know it is unfair to have talked about an unrelated show so much, but its a specter that hangs over much of, "Solar Opposites," even while it makes it own way. The show is a bit like, "3rd Rock From the Sun," actually, as it has a family of aliens living on Earth and struggling to acclimate in humorous ways.  There aren't really any long-running subplots beyond a wall filled with shrunken humans who annoyed one of the aliens, instead, each episode is just a wacky little plot with some laughs and zaniness. It's light, chill, and fun.