Bubble Wrap is the Main Weapon of the Comic Distribution Wars 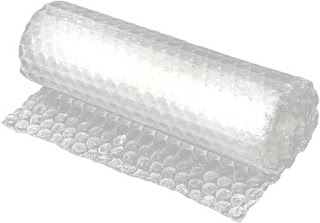 Who knew bubble wrap could be such a big deal? You see, DC Comics recently broke their exclusivity deal with Diamond Comic Distributors (when Diamond shut-down for a month-ish) and started using their own distributors run by big retailers. Comic stores that used these distributors were impressed by how the comics that arrived at their store were packed better than Diamond has sent comics. Generally with Diamond its just comics and trades shoved in a box with little care, resulting in a good deal of damaged product that ends-up having to be destroyed and replaced. DC's distributors were using bubble wrap to express even the most minimal degree of care for the comics, and now it seems Diamond is following suit.

Feelings have been mixed about DC and its distributors, but Diamond was a monopoly for years and didn't have to change or improve anything to stay in business. Now, with even the tiniest modicum of competition they have stepped up their game and are using bubble wrap too, it appears. Perhaps when Diamond doesn't have a stranglehold on the comic distribution market they actually need to give a damn, eh?
Posted by David Charles Bitterbaum at 11:20 AM