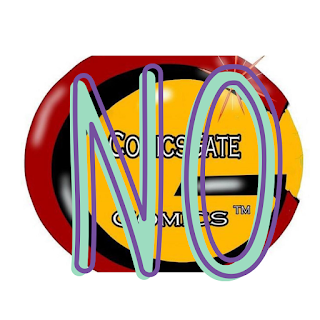 ComicsGate is the so-called movement that grew out of Gamergate to some degree with them both being about basically harassing anyone who is a woman, a person of color, LGTBQ who wants to have the slightest hint of a non-alt-right political agenda in their comics, and so forth. They hate supposed, "Forced diversity," or needless politics in their comics (as in politics they don't agree with). Kind of led by the monstrous Ethan Van Sciver, they like to harass and threaten anyone who challenges their simplistic view of the World. It is a toxic brand and a handful of creators embrace it out of being ignorant jerks and/or realizing they can milk ComicsGate fans for all they're worth, with Sciver himself years behind on a comic that may never come out which he raised a bunch of money for on Indiegogo thanks to his ComicsGate fans. Who would want that as any kind of trademarked logo? A number of people, apparently.

There are three different dueling trademarks for, "ComicsGate," at the moment, with two people after having a right to the name for commercial purposes in earnest, and another being an actual enemy of ComicsGate who wants to make things harder for them to use the term with their published works (someone trolling for a good cause, now that's snazzy)! The whole thing is as messy and nasty as ComicsGate itself, and while I understand trying to get rights to the term ironically, anyone who wants to actually use the term as some kind of positive signifier is a being a moron as it is malignant, its followers are venomous, and ComicsGate would best be left buried and forgotten like the dangerous waste it is.
Posted by David Charles Bitterbaum at 8:41 PM