This Infographic About American Gun Ownership is Fascinating

I have made it clear on my blog how I am extremely in favor of gun control/not big on how the 2nd amendment has been interpreted. I have had readers and friends who agree with me on this and those who disagree. As it stands, I'm not really a fan of civilian gun ownership. Therefore, I am probably about a complete 180 degrees in terms of views from most readers of a website called The Minuteman Review which is all-in on guns and the idea of the right to own as many as you want with no limitations. That said, when someone from the website reached out to me about how their site had assembled a massive guide about gun ownership in America and was seeing if blogs wanted to share it, I was intrigued.

Having reviewed, "The Ulitmate Firearms Industry Guide: Statistics, Trends, and Data," I can say I am impressed with how much raw data it complies into objective facts that are easy to follow and read. It breaks-down how much gun ownership there is in America clearly by multiple factors (race, sex, etc.), concisely lays out data about why people say they own guns, facts about concealed carry permits, and it has no pro-gun or anti-gun viewpoint so much as just tells facts. Now, if you are someone who is concerned about guns you would probably be alarmed by a fact like how 46% of the World's guns are owned by Americans, but someone who wants less gun control will probably be pleased to see that 29.59% of gun owners say they own more than five guns. It is all detailed data that those who love guns or hate guns can really dig into. 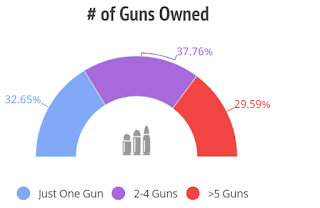 I don't agree with The Minuteman Review on guns in basically any way, but I will say they did an amazing job creating this guide and it is one of the most in-depth infographics on gun ownership I have ever encountered. Whether you feel the way I do about guns or are more closely aligned with the views of The Minuteman Review you will probably find the information interesting too. I thank them for contacting me about it.
Posted by David Charles Bitterbaum at 2:06 PM