The Grammys Have Turned Into a Big Mess 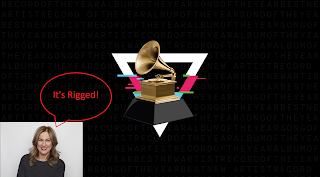 Remember when the main joke about the Grammys was people joshing around about how it wasn't, "Even really an award that mattered?" Shows like, "The Simpsons," on numerous occasions poked-fun at the Grammys. It seems quaint, as now in 2020 when we talk about the Grammys it is more from a perspective of if the whole thing is one massively rigged sham. It all started when Deborah Dugan, the former President and CEO of the Recording Academy (who gives out the Grammys) was suddenly removed from her position of power. She began to spill so much tea it was a like tidal wave of Lipton.

As Deborah Dugan tells it, she was expressing concerns about sexual misconduct and how the Recording Academy would engage in vote-rigging, where someone who maybe was in 16th place for votes was still a top nominee as then they would be willing to perform a popular jam at the show or such. Dugan says because she tried to correct misconduct and corruption she was thrown-out for not playing ball and/or accepting sexual advances from a lawyer who negotiated big record deals, and/or letting the rigging continue. The Recording Academy paints a very different picture of Dugan as a toxic employer who made everyone miserable and was otherwise a nightmare to work with. They say she's just a vengeful pain-in-the-ass who is making up lies now that she got fired because of how miserable a human being she is. It is a mess, and this year's Grammys are, oh snap, this coming Sunday? All of this started about two weeks before the actual show?
A month ago people were vaguely excited about the Grammys and I don't think anyone would have predicted just how big a cloud hangs over the thing now. Award shows have always been exercises in navel-gazing and self-congratulation, but at least the statues were given with some degree of legitimacy attached. If a big-name award isn't even reputable to some degree how is it any different from me sitting-in on a committee that decides the best bloggers and making sure I'm the winner or else I won't appear at the show? That sounds like a horrific conflict of interest, and artists sitting in on groups where they were nominees--just like my example--is something Dugan has claimed happened all the time!

I don't know what the absolute truth is in this case. I just know the whole thing has turned into a big mess. Whether the actual broadcast of the Grammys addresses this at all remains to be seen, but it definitely has put a damper on the proceedings and raised a whole lot of questions.
Posted by David Charles Bitterbaum at 4:50 PM