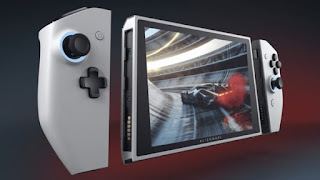 At the Consumer Electronics Show (CES) all kinds of interesting and sometimes bizarre pieces of technology are introduced. There are items there that go on to become huge hits and things that just cause everyone to scratch their heads in bewilderment, shown-off as a concept but never actually seeing the light of day. Alienware showed off a conceptual portable PC suitably named the, "Concept UFO," at CES and man, it looks like a PC version of the Nintendo Switch.

Nobody on stage when the Concept UFO was unveiled pointed out how much it looks like a Nintendo Switch, or that the controllers pop-off and can attach to themselves like a Nintendo Switch. For real though, this conceptual PC totally rips-off the Nintendo Switch, and that could actually be clever. Imagine being able to access your game library on Steam, GOG, Epic, or whatever service you use and playing any game that supports a controller moderately well? That would be pretty snazzy, although a graphics-heavy game would probably zap the battery in something like the Concept UFO in an hour or such...making it not exactly that portable unless you have easy access to a charging port while you're out and about.

The Concept UFO is more of a theoretical prototype than anything else. It also really looks like a Nintendo Switch rip-off. That said, maybe the Nintendo Switch has some good ideas that are worth drawing inspiration from, with even me admitting after some initial trepidation I kind of want one these days. I guess we will have to just wait and see if the Concept UFO will ever become the, "For Sale UFO," if my horrible pun makes sense.
Posted by David Charles Bitterbaum at 9:01 AM