The First Volume of, "Way of the Househusband" Is a Wonderful Read! 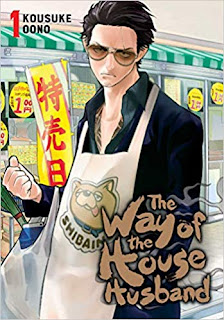 There is a new manga series that had the first volume released in English a bit ago and the second volume (which I plan to read soon) just came out in English as well. It is titled, 'Way of the Househusband," and follows a man who was once an extremely dangerous Yakuza member known as, "The Immortal Dragon." The thing is, one day he just suddenly quit to live as a househusband. His wife goes to work and he uses his skill with the blade to cook, also cleans the house expertly, goes out looking for good deals on clothing, and otherwise keeps things in order. It is a setup which is a little like, "John Wick," if Wick had simply stayed out the mob underworld instead of getting involved again. The comic is mostly light humor with bits of really dark moments hinted-at but not fully explored. I loved it.

Perhaps because I am a stay-at-home Dad I relate a bit to being a househusband and how it can garner unique reactions from people. I was never a feared member of the Yakuza, but I'll still get stares if I'm the only guy out shopping somewhere or at a food event (the Immortal Dragon does not have kids, but would probably also get comments as I do about how cute my son is and those are welcome, weird questions about where mommy is are met with snarky replies). Funny moments abound as the Immortal Dragon intimidates people who see all his tattoos and wonder if he's dangerous, even if the guy just wants to take advantage of a clearance sale. Run-ins with past rival gangs lead to issues too, as few want to believe he truly has stopped being one of the most dangerous Yakuza enforcers around for a quiet and happy life. 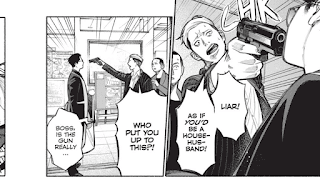 There are many, "Misunderstanding," scenarios that are humorous and little clues about just how feared this man once was. When one former rival hits him over the head with a 2X4 he just laughs as his head starts to bleed and remarks it would be great for making some furniture. It scares them off, then he proceeds to take the 2X4 home and use it in a craft to make a cute and dainty children's chair. It is a surreal comic for sure.

One thing I would've liked, "Way of the Househusband," to explore more is just how the Immortal Dragon ended-up with his wife and how much she knows of his past. There is a moment toward the end it is indicated she first met him when he was in a bad way and she helped him (with them then falling in love shortly thereafter, one would figure). This was just the first volume of the series, so there is plenty more time to explore their relationship between shopping excursions and hilarious vignettes such as where a malfunctioning robotic vacuum cleaner wreaks havoc. 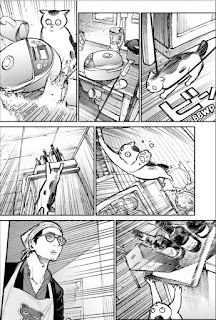 Kousuke Oono is the writer and artist; he does a masterful job illustrating this manga. The Immortal Dragon looks incredibly imposing even when being sweet, which makes sense as he was dangerous for years before becoming a househusband. For a book about a relatively peaceful life, it also is extremely kinetic, with a chase after the aforementioned robotic vacuum cleaner looking impressive and moments of creating tasty dishes full of gorgeous drawing where you can really sense the energy that goes into making a meal. The artwork and story are both superb and I can't wait to get a copy of the 2nd volume that just came out, and future volumes to enjoy as well!
5 out of 5 stars.
Posted by David Charles Bitterbaum at 4:27 PM