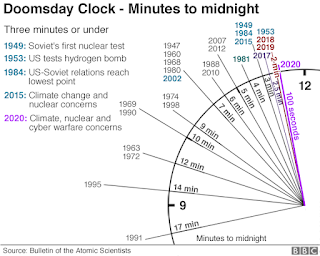 The Doomsday Clock  (no relation to the recent comic series) was created to represent how close we as a World are to an utter planet-ending catastrophe. Originally created with the threat of Nuclear war in mind during 1947, now it applies to just all the general trouble in the World that could result in Atomic destruction being triggered. Between mystery viruses emerging from China, how Australia is on fire, the climate being an utter mess, politicians like Trump inching us closer to war, and so forth, the clock has inched closer to Midnight. We are now less than two metaphorical minutes to everything ending, 100 seconds. This is the closest the clock has ever gone to utter destruction.

Now, this is, of course, an opinion of the Bulletin of Atomic Scientists, but I would say if anyone is qualified to judge how close we are to planet-ending Nuclear war, it would be Atomic scientists. This is worrisome, in other words. Things are bad, and I really hope they get better before we strike midnight and the planet is just a big ol' smoldering crater.
Posted by David Charles Bitterbaum at 12:31 PM