Film Friday: Why Would You Lie to Us With a New, "Friday the 13th," Tease Like That? 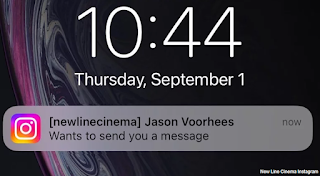 "Friday the 13th," as a franchise has apparently been in legal Hell (unrelated to when Jason went to Hell) due to fights over the rights. For a moment it looked like something had been figured out, however. Hints were being dropped that a new film starring Jason Voorhees could be coming, but it was all for naught. New Line Cinema had a faux-Instagram alert that Jason Voorhees wanted to send a message to people. It got lots of folks excited. Then New Line Cinema revealed they were just having a bit of fun. Fun? Is it honestly that fun to play with my emotions and hope for a new, "Friday the 13th," and then leave me feeling let down and dejected? I imagine something is in the works, but it won't be announced immediately soon, most likely. What a bummer.