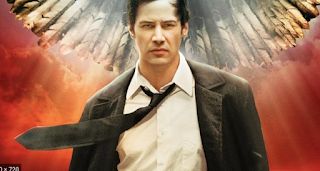 Rumors swirled for a while that the different-but-still-good take on John Constantine that Keanu Reeves supplied us with in the simply titled, "Constantine," could get a sequel. An underappreciated version of the character, even the comics sometimes acknowledged differing versions of the character (including this version) could exist. Getting an actual sequel seemed like a long shot, even if Peter Stormare (who played Satan) seemed to let slip something was in the works back in 2020. Well, as of today, Deadline has confirmed, "Constantine 2," and I'm pleased!

The original movie was all the way in 2005 with Reeves as the star and Francis Lawrence making his directorial debut. Both are back in those roles and I'm intrigued to see what this version of John Constantine may have been up to in the nearly two decades since he last graced the screen. Maybe some other DC characters will even be involved, for all we know. Warner Brothers Discovery is a bit of a mess right now, so at least we got something good out of the company alternating between canceling stuff and throwing whatever it can at the wall to see what sticks.