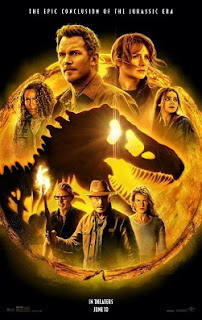 I enjoyed "Jurassic World: Dominion," despite itself. It is overlong and bloated. It adds a whole new subplot about giant locusts to further complicate what should be a straightforward flick about Dinosaurs in the real world. It also focuses less on the clever idea of Dinos trying to coexist with humans that, "Fallen Kingdom," introduced and instead takes us back to a park of sorts--this time a, "Conservation park." We spend the second half of the movie in that conservation park and it would be a bit dull except for the fact it is when the film finally brings all the new leads (Chris Pratt, Bryce Dallas Howard) into contact with the returning nostalgia-packed leads (Sam Neil, Laura Dern, and good ol' Jeff Goldblum).

I honestly enjoyed the first half of the movie a bit more as it had a chunk of the, "Dinosaurs in our World," plot I was expecting. Frankly, the movie is basically a number of big set pieces loosely tied together by a plot with an evil CEO who seems like a cross between Elon Musk and Mark Zuckerberg with a fondness for genetic tampering. Various plot points overlap and diverge but it matters little because we're here for the big and impressive Dinosaurs, damn it. At least the movie does deliver on that. 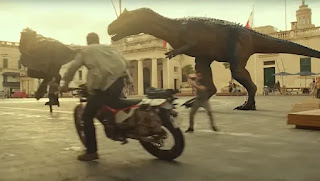 We get Dinosaurs running along rooftops with humans in a scene that gave me, "Jason Bourne," vibes, but with Dinos, we get the big ol' creatures in the American wilderness being herded like cattle, we witness some huge ones fighting, and it is all a good time. Then the movie slows itself down to tell us more about genetically modified locusts with Dinosaur DNA and I start checking my phone until we get to some more prehistoric action.

The series has continually moved away from being science fiction that seems a bit plausible and goes full-out future-tech in this entry with the aforementioned conservation area being a jungle in the middle of freezing Italian Mountains surrounded by a fancy research base that looks a little bit like the corporate areas of, "Westworld." I don't mind it, but things are far removed from the now quaint-feeling vibe of the first, "Jurassic Park," we got decades ago. If it gets us weird and wild Dinosaurs though (one dives into icy water and swims like a lethal penguin), I'm cool with it. 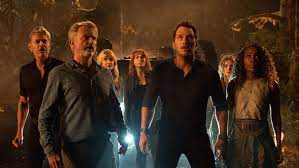 "Jurassic World: Dominion," wants to feel futuristic but also feels obsessed with the past. A big enough check was written for the OG trio to all return and while Neil, Dern, and especially Goldblum seem to be having fun, it is often one big heaping helping of nostalgia designed to remind us of far more superior entries in the franchise (the first two films, "Jurassic Park III," can burn in Hell). I enjoyed this movie, but it felt like a letdown after how, "Fallen Kingdom," at least tried to do something different and a bit weirder with its horror-movie-styled second half that featured a genetically-modified raptor stalking through a mansion like a supernatural monster. "Dominion," did still entertain me even if it could have trimmed a good 30-45 minutes off its 2-and-a-half-hours of runtime. I give it...

My ranking of the franchise now stands as...

2. Jurassic World--I've rated it 5 stars before and stand by that.

5. Jurassic World: Dominion--3 stars, as you saw above.