I Don't Care What They Say, I Love You Anyway 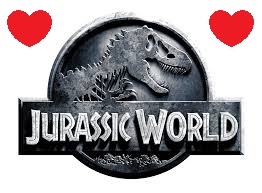 First off, this review is full of spoilers. You have been warned.

"Jurassic World" is a movie I love, regardless of its many flaws. I don't mind the various plot-issues like how it makes almost no sense for a Dinosaur that has always been in captivity (the popular Indominus Rex) to be able to just magically "talk" with raptors, or how the owner of the park who barely knows the methods to fly a helicopter is entrusted with the one big gun the park has when the time comes to try to kill Indominus--to name just a couple issues.

I love this movie because it has some quality humor, contains the beloved Chris Pratt (who makes a character that might have otherwise been unpleasant bearable), and of course has some just plain gorgeous dinosaurs. Plus, this is loaded with fan-service for people who loved the first film (the events of the 2nd and 3rd are basically totally ignored). We get to see the Visitor's Center from the old Jurassic park with nature growing all over it, the T-Rex from the first film pops-up to help fight Indominus Rex (with help from a Velociraptor!)in a bit that had my inner-child squealing with joy, and it really is a lot of nostalgia, but in a good way.

There is that piece of me that just loves Dinosaurs and the idea of a park with them so much that seeing it come to life on the screen--even if it shortly all falls into mayhem--is a sheer delight. The movie may have its flaws that have resulted in some critics out-and-out bashing it, but there really is too much good stuff to let the poorer aspects leave a bad taste in my mouth. Even though this isn't as great as the original "Jurassic Park" it still is exciting to watch Chris Pratt training raptors, see people riding cool glass spheres alongside dinosaurs, and otherwise just be impressed by the sheer majesty of the flick.

There Is Admittedly An Issue, or Two
My only true peeves with the movie are two things. First, it would probably be how it does leave some plot threads hanging for future flicks--B.D. Wong's character jetting off with a bunch of Dino-DNA is ominous--although it can be understandable that with how much money they knew this would make that the  studios try and get people wondering what a future flick could hold. My other issue is that it really is kind of a sexist film, with Bryce Dallas-Howard being a stereotypical "ice queen" who falls in love with Pratt and realizes the most important thing of all in life is letting a man get her pregnant (so just forget about your career and stuff, you need to pay attention to those ovaries!) as opposed to being proud of her intelligence and success.

Oh, and I don't really have an issue with the kids so much as I found them kind of useless to the plot as anything other than a macguffin to get Pratt and Dallas-Howard's character out into the jungle. You could cut them from a lot of the film and it'd be fine.
Those two problems covered, I absolutely loved this film and would see it again and/or own it without question. It may not be as good as the original "Jurassic Park" but it still is a grand time. The assortment of special effects, jokes, and the simple sense of wonder seeing Dinosaurs evoke results in a great movie. I would eagerly recommend this flick, and should you be a big fan of Dinos, Chris Pratt, or fun in general I think you'd agree it is some quality stuff.
5 out of 5 stars.
Posted by David Charles Bitterbaum at 11:07 AM