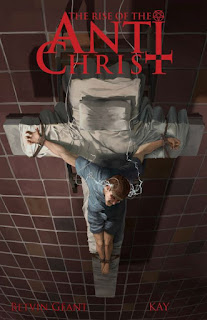 I'm a fan of all comics, be they the bigger releases or smaller-press indie ones you find on Comixology and such. I picked up a lot of great stuff at Wizard World I plan to review, but actually right before it I was contacted by a gentleman named Betvin Géant who was curious if I would give a comic written by him a look. Titled, "The Rise of the Anti-Christ," it has had two issues come out via Comixology so far and is an interesting series, with some solid art by an artist called Kay.

When you have something as clearly influenced by religion as a comic touching on concepts of the Antichrist, you figure you're either going to get a super-religious bore that reads like a conservative's wet-dream (just look at Chick tracts), or a supremely politically-incorrect work that mocks religion thoroughly (A variety of Garth Ennis works spring to mind). Interestingly enough, "The Rise of the Antichrist" doesn't really read as a piece of preaching or as if it has the intent to be a parody. Instead, it comes off as an at-times gruesome piece of horror that also deals a fair amount with mental illness.

The main character, Michael, is in a ward of the hospital dedicated to those with psych-issues, his obsession with religion resulting in his being an utter wreck of a human being, terrified of demons only he can hear. The thing is, at the end of the first issue it seems his visions and fears may very well have a true evil behind them, with Michael meeting Satan at the start of the second issue and being informed he serves as the perfect vessel for wreaking havoc on Earth--i.e. he's gonna be the Antichrist.

It is clever to think that someone obsessed with religion from a childhood of being told bible stories to an adulthood where he plucks out his own eye after feeling sinful for ogling a woman would be picked by the Devil to be the new bringer of death and destruction, and the imagery is suitably twisted. The quoting of the bible may be meant to give things an air of authenticity, but the creators go a little heavy on it in the first issue before thankfully letting-up with the bible and focusing more on the plot in the second. The character of Michael is clearly meant to be someone we pity, and his unhealthy obsession with being morally-right and how he is doomed to be a force of evil does make him an empathetic character. Some other elements are less fun, with a variety of characters seeming paper-thin in terms of depth, and allusions that are a bit on-the-nose (a woman named Judith--like Judas--we barely get to know is accused by Michael of being a traitorous friend, the hospital is called Golgotha, etc.). You don't need to be well-versed in Christianity to understand everything, but having a passing familiarity with the religion does let you pick up some references in that manner. 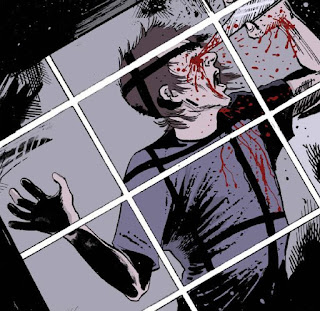 Even if some characters come across as not especially fleshed-out and the 1st issue goes too heavy on the bible-quotes, the general tone of eerie discomfort and creepy imagery helps carry the comic along nicely and results in an intriguing read. Betvin and Kay have given us a solidly entertaining first two issues of "The Rise of the Antichrist" and I am curious to see where things go next. Should you be a fan of horror I would recommend checking it out, especially at its very fair price of $.99 per issue.
3.5 out of 5 stars (for both).
You can find the 1st issue for sale on Comixology here, with the 2nd issue found at this link.
Posted by David Charles Bitterbaum at 6:48 PM

Email ThisBlogThis!Share to TwitterShare to FacebookShare to Pinterest
Labels: comics, internet, rant-reviews, The Rise of the Antichrist