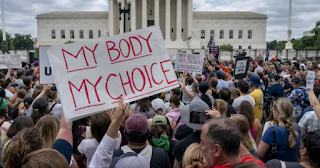 I already said a lot of what I had to say about abortion rights being overturned back in May when a Supreme Court draft leaked that made it look like we were due for this mess. Now it is June and here we are, Roe is overturned despite all those far-right justices assuring us such a thing wouldn't happen. They were lying through their teeth, no surprise. Now one big goal conservatives have had in mind for decades has been achieved.

A chunk of people wanted to take away a person's control over their reproductive rights and now there is no Federal protection. I'm doing a sarcastic, "Congratulatory," slow clap right now. A number of states have trigger laws in place that have basically outlawed abortion in all but the most extreme of cases--and even people in those cases might face absurd amounts of red tape and could very well die if in need of an abortion to save their life. I'm incredibly disturbed and disgusted today. There is not much else to state.