The Hardcover Collection of, "Squeak The Mouse," is a Fascinatingly Strange (and Very Extreme) Read 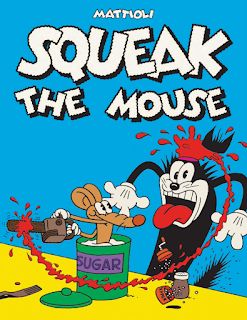 Back in the 1980s, an author by the name of Massimo Mattioli created, "Squeak the Mouse." Mattioli created all kinds of amazing works and was a huge figure in Italian comics. I read a review-of-sorts of his work, "Squeak the Mouse," on The Comics Journal, however, and after seeing what Sean McTiernan had to say about it, wanted to check the hardcover collection of the series out myself. It starts out a bit like an extreme version of, "Tom and Jerry," and arguably could be seen as the inspiration for, "The Simpson's," well-known Itchy and Scratchy. However, after just a short number of pages, the cat kills the mouse, and the one-note joke ends...but the comic doesn't. Oh boy, it does not.

The remaining pages of the first issue/volume of, "Squeak the Mouse," feature him repeatedly coming back from attempts to kill him like some sort of slasher monster. It gives the book a fun horror vibe. Then in the later issues collected in this big hardcover, the joke of the cat and mouse seems to kick off before morphing into something else strange and weird, be it the mouse killing the cat and then living large, or the cat and mouse having a crazy space battle. The thing that made, "Squeak the Mouse," most controversial was not actually the violence. The comic--as like many underground comics/comix in the past--has some really raunchy moments. 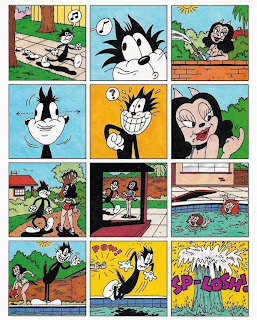 You see, whenever the cat and mouse aren't fighting each other the odds are good they'll be engaging in some quite explicitly rendered sex with other cats/mice that look a little like animals but have very human-style breasts and genitals. These anthropomorphic x-rated moments in each issue had the comic seized in the 80s when it was flown into the United States and accused of being obscene. It was quickly ruled that the comic was protected by the first amendment even if it was quite saucy, but being able to claim the issues faced any trouble definitely boosted sales at the time.

"Squeak the Mouse," features some fantastically illustrated vignettes be they as simple as a cat and mouse fighting, riffing on horror movies, mirroring sci-fi pulp books, or morphing for some segments into really detailed pornographic scenes. Underground comic/comix are an acquired taste for those who don't mind sometimes explicit violence or sex intermingling with surreal and often quite clever stories. Should you not be easily offended and enjoy trippy and gorgeously drawn comics, "Squeak the Mouse," might just be right up your alley.