Television Tuesday: The Netflix Marvel Shows are Coming to Disney+ 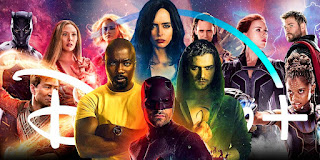 In a move that honestly surprised me a bit, the Netflix Marvel shows and apparently other more R-rated/TV-MA rated content will be coming to Disney+ starting March 16th. I didn't think Disney+ would ever let itself (in the United States, at least) carry more mature content when Hulu was also an option (mature stuff is on Disney+ in other countries already). Disney will offer a function to lock out the more mature stuff behind a PIN or such and soon all the Netflix shows will be side-by-side with the rest of the MCU. Anyone who has heard the buzz about, "Hawkeye," or the most recent Spidey flick already knows some Netflix characters are popping up in the MCU, so I guess Disney now can pick-and-choose what it is wanting to use from the Netflix shows. We are entering an interesting era.