Film Friday: "Irredeemable/Incorruptible," Escapes Development Hell and Will Be a Flick 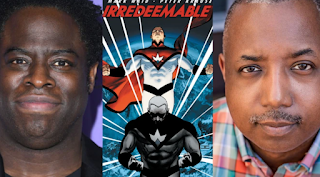 "Irredeemable," was a comic by Mark Waid and Peter Krause about a Superman-level hero who one day snaps and starts just wreaking mayhem. "Incorruptible," was a comic that spun out of it following a villain who becomes a good guy in response to how bad things become. The two comics will be combined into a single feature film that'll stream on Netflix. After years of development Hell, something is actually happening! I thought both series had their moments and would be curious what a movie that combines the two might be like. Jeymes Samuel will direct and Kemp Powers will be writing the screenplay. Published by BOOM! Both series wrapped a bit over a decade ago (I told you the properties were in development Hell) and were a big success for BOOM! when it was first starting out. I do wonder if this is a sign of more adaptations to come of other BOOM! properties.