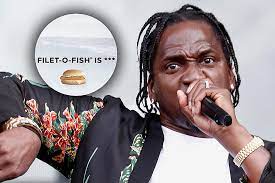 I will always tell anybody willing to listen that Clipse was incredibly underrated as a rap duo. They had a solid debut album, were stuck in a contract-limbo for years that delayed an official follow-up, but once they could actually release new LPs those killed it too. They basically dissolved in 2010 (besides reuniting on one song with Kanye West in 2019) and have since then had solo careers with No Malice (originally named Malice) and Pusha T seeing success doing their own thing. I've followed the works of both gentlemen (admittedly a bit more Pusha T) and when I heard Pusha T had released a diss track aimed at McDonald's where he rapped about how great Arby's fish sandwiches were, I was a little confused and quite intrigued.

Apparently, this is not just Pusha T randomly teaming up with Arby's for a check (although I'd hope he was paid well). Pusha T has a bad history with McDonald's, having apparently helped co-write the, "I'm Lovin' It Jingle," in 2003 with No Malice, Pharell Williams, and Justin Timberlake. Timberlake made 6 million, Pusha T has said he and No Malice got, "Peanuts." in terms of initial money and zero royalties. Now, Pusha T has 75 seconds of pure fire where he slams McDonald's with his stellar rapping and makes it clear that Arby's is where you should go for a better fish sandwich. Give it a view/listen below:

Yes, yes he snuck in a cocaine reference, which is not surprising if you're familiar with Pusha T's raps. I look forward to seeing how McDonald's responds (hopefully they do) and if Wendy's puts out a funny tweet as they always like to be involved in wild shenanigans.