Television Tuesday: The New, "Joe Millionaire: For Richer or Poorer," is a Hot Mess and I'm Here for It 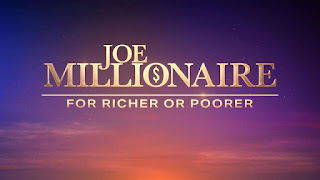 Ya'll remember, "Joe Millionaire," back in 2003 (if you were born then)? It had all these ladies vying for the love of a millionaire but the twist was that he lacked anywhere near that many digits in his bank account? It had a sequel season nobody cared about and then was put in the franchise graveyard. Well, you can't keep a (good?) idea dead, so now we have, "Joe Millionaire: For Richer or Poorer." This time things are different, however. There are two men and the ladies competing for their love are informed one is worth more than 10 million while the other is not. We viewers know the guy with the cattle ranch is rich and the other guy who has a construction company just is financially stable (so it's not like one is flat-broke), but the ladies have to keep guessing and determine if they're after love, money, or maybe a bit of both. It's disgusting. I love it.

Let's start with the biggest flaw this season, the actual contestants. When you watch, "The Bachelor," or other shows there was always standout personalities who grab your attention from the beginning. The women on, "Joe Millionaire," are basically not young enough for, "Love Island," or interesting enough for, "The Bachelor." Some hint they might just be after money in a sly way, others seem genuinely sweet, but we lack any big, "Oh, I love her/oh she's a villain," participants. Frankly, the two guys are actually more interesting, and just watching them interact and be friendly bros is a highlight. Steven (the rich rancher) and Kurt (the less wealthy construction guy) are both quite funny, laid-back, pleasant, and handsome (Kurt may not be rich but I am comfortable enough with my sexuality to admit he is fine). The lack of much of a pulse from the females at first was concerning and I didn't know if I'd be into this show. Then the dates happened.

Oh man, the dates in the final third of the 2-hour premiere are what sealed the deal for me with liking this show. I wasn't sure if this version of, "Joe Millionaire," was trying to be a serious meditation on love versus money or a hilarious mess. It was failing at being the former but then it did a lovely job being the latter when the ladies were split into two groups--one that went hokny-tonk dancing at a bar and another assortment who attended a cotillion of sorts. Steven did the honky-tonk date and everyone had a fantastic time dancing, drinking, and then swimming in the pool back at the mansion. Meanwhile, Kurt headed the cotillion which dissolved into crying, screaming, and name-calling as the ladies seemed to be seeing who could get more sloppy drunk than the other.

I realized what, "Joe Millionaire: For Richer or Poorer," wanted to be when it did a split-screen between one date being full of laughter and fun and the other having tears and screaming--it wants to be a hot mess, and God bless it for that. The basically-simultaneous exclamations of, "Best date ever!" and, "I hate it here!" were just a hoot and the melodramatic televised junk food my brain needs after a long day. It's on Thursdays on Fox. I'd recommend it based on how delightfully trashy it was when the first episode finally got into gear.

4 out of 5 stars for the first episode.