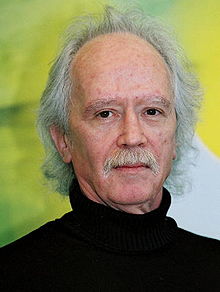 When you're making a list of the best directors of films one name that should always be on that list is John Carpenter. "Halloween," "The Thing," "Escape From New York," "They Live," and I'm even a fan of his, "Vampires," too. He has so many great movies he has made and he's skilled at producing music too. John Carpenter turns 74 years old today and I wanted to wish him a happy birthday! He's somewhat retired from making movies but has been playing video-games since the 1990s and still enjoys them--so that and still releasing music has been a focus of his lately it seems. Happy birthday, John!

Posted by David Charles Bitterbaum at 11:11 AM