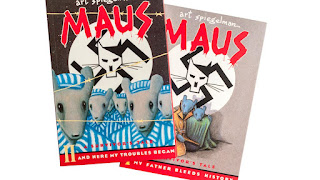 A Tennessee school board removed, "Maus," from the eighth-grade language arts curriculum due to concerns over foul language and a panel of a naked mouse character in a non-sexual situation. They banned a book about the Holocaust because it contained words like, "God-damn," as apparently, eighth-graders are delicate flowers who never swear or witness nudity anywhere. "Maus," and, "Maus II," or the combined printing of, "The Complete Maus," are/is incredibly hard to read, but necessary cultural and historical text. They are comics about the holocaust by Art Spigelman that use cartoon imagery as a metaphor with Jews as mice and the Nazis as cats. It's the only graphic novel to ever win a Pulitzer Prize. One would wonder if perhaps people are more upset about a frank and honest portrayal of the horrors of the Holocaust than some swear words and nudity.

Over six million people died because they were Jewish, LGBTQ, Roma, Polish, Russian, disabled, and anything else besides the supposed Aryan ideal. When a school board votes 10-0 that a book with a frank, honest, and admittedly horrific portrayal of the Holocaust is, "Offensive," they are missing the point. The Holocaust was one of the biggest offenses in human history. It is one of the darkest chapters in humanity. We literally say, "Never forget," and just had Holocaust remembrance day yesterday, and some people are upset over a bit of cursing in a book about the evils of Nazis and fascism? Excuse my own language as I try not to get too sweary on the blog, but come the fuck on.