"King in Black," Has Been a Pretty Dull Event 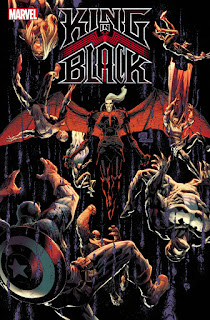 Alright, time for some brutal honesty. I admitted before I found how, "All-in," Marvel had gone on the character of Knull to be a bit perplexing. He was an evil God of symbiotes who wanted to destroy everything for no specific reason beyond hating the existence of life. Kind of a bland villain with some cool design elements but little interesting motivation. Still, I thought I would give the, "King in Black," event where Knull comes to Earth a chance. I've been reading it and some tie-ins that relate to it closely or slightly. Some of the tie-ins are fun, but the actual event comic itself has just been dull. Knull is covering Earth in symbiote goo, taking-over heroes, all seems lost, but of course, the heroes will fight back, and...yeah, that's about it. A big space villain has come to Earth, is wreaking havoc, but he'll eventually be defeated and the long-lasting ramifications will be minor.

You could replace Knull with any other space threat and the event would be mostly the same besides how symbiotes such as Venom are kinda cool to look at when drawn well. I don't hate, "King in Black," so far, I just find it uninspiring with the most interesting story elements actually happening in the tie-in comics that are using, "King in Black," to further their own storylines in clever ways--although some tie-ins are suffering from being bogged down by it too, so it is kind of a wash. Perhaps as we near the finale of, "King in Black," it will do something to really wow me. Right now though, it's just been kind of blah.