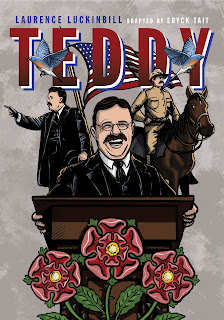 "Teddy," is an upcoming release this month from the publisher Dead Reckoning, the graphic novel division of nonprofit publisher Naval Institute Press (I've reviewed a chunk of their historical-focused graphic novels). Written by  Laurence Luckinbill with art by Eryck Tait, it provides a biographical look at Theodore Roosevelt's life as told through an extensive (fictional) speech by Roosevelt himself, looking back on his fascinating life.

I've read a good deal on the first Roosevelt to be President--the good and the bad, and I'd say this graphic novel provides a great introduction to Roosevelt for those who are not familiar with him and want a general overview of what he stood for, what his life was like, and how sometimes the legendary tales about him ended-up overshadowing a very human and failable man (the famous incident that led to the creation of Teddy bears is mentioned with a mixture of bemusement and disgust by Roosevelt. Our 26th President spends this graphic novel remarking on a life that had a solid mixture of sorrow, luck, and choices that sometimes worked out amazingly well (the Panama Canal) and ones that worked our horribly (a failed attempt at a third term as President with a third party). 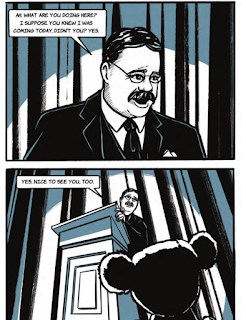 Eryck Tait does not have an enviable position as this book's illustrator as he is taking a book focused on one man talking and given the task to make it look interesting and exciting. Tait is up to the task, however, putting clever flourishes into the speech, as if the World around Roosevelt were coming alive with the imagery of his retelling of all the eventful moments in his life. Tait makes sure the fact we are reading a speech--a great speech, but a speech still--never results in the book being too dry or stagnant.

"Teddy," is a fantastic book for anyone who is curious about Teddy Roosevelt but isn't sure where to start. Luckinbill's writing and Tait's artwork combine beautifully to result in a stellar overview of a President who left a complex legacy of both immense accomplishments and all too human failings. Look for it at all finer comic shops and bookstores later this February!

Note: A digital copy of, "Teddy," was provided by Dead Reckoning for the purposes of review as I am on their press list.