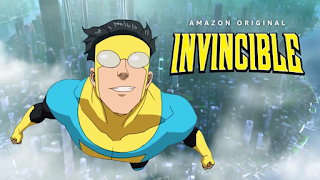 If Robert Kirkman weren't famous for, "The Walking Dead," he'd probably be best known for his comic, "Invincible." It was a solid read about a family with a young man who's Dad is a superhero and teaches him the ropes when his powers form. That's just the start of things, however, because as the series went on there were twists upon twists. It was also pretty bloody at times when the fighting got heated. The cartoon adaptation of, "Invincible," seems like it will be quite entertaining, tonally similar, and yeah, it's bloody--as seen in a trailer that just dropped. The show will debut on Amazon Prime Video this March and will most likely be worth a watch, based on what I've seen of it.