This Doodle on a Comic Package Was Cute 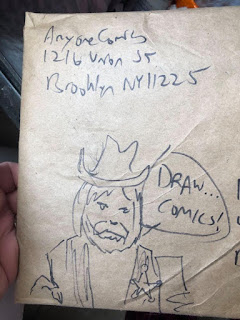 I will order comics from various online locations sometimes if I can't find them locally. I've found and heard of various stores with an online presence and will try various ones out. A friend mentioned that Anyone Comics sells stuff online and will sometimes doodle on the package they send the comic in with an image that is themed for the comic. I ordered from Anyone Comics and sure enough, they did a fun doodle for me as you can see above! The comic I ordered was a 1:10 ratio variant of the Western book, "Chained to the Grave," #1 and the doodle is indeed western-themed! The man is saying to, "Draw," but not a gun, comics! The ratio variant can be seen below: 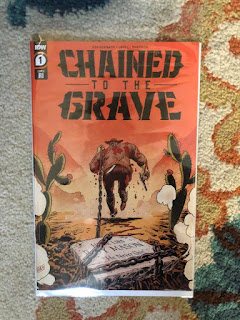 I appreciated the fun doodle by Anyone comics and would encourage you to check them out at this link if your local stores ever lack something/you don't have a local store.

Email ThisBlogThis!Share to TwitterShare to FacebookShare to Pinterest
Labels: Anyone Comics, Chained to the Grave, comics, internet, news