The Baby Mr. Peanut is a Crass and Blatant Attempt to Get That, "Baby Yoda," Hype 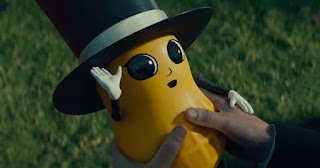 You know why Baby Yoda (who isn't actually Yoda, but yeah) worked so well? It came out of nowhere (they really kept it a secret) and nobody was trying to force us to think Baby Yoda was cute or, "A thing." It just became a thing because it was so damned fun. Planters made a huge deal about killing off Mr. Peanut only to attempt to surprise everyone with a rebirth that features a baby Mr. Peanut, or Baby Nut. The ad ran during yesterday's Super Bowl. I ain't into it.

Planters without a doubt want some of that Baby Yoda hype but as opposed to having something organically happen are crassly trying to shoehorn Baby Nut into Twitter discussions or news posts saying dumb stuff like, "There's a new challenger to Baby Yoda for cuteness!" People already hate the Baby Mr. Peanut and I do not blame them. Even if he is actually kind of cute, the blatant and cynical commercialism of him overrides any affection I could hold for the thing. I personally dread how many ads we are going to suffer through from Planters featuring this Baby Mr. Peanut, because you know they will have many planned.
Posted by David Charles Bitterbaum at 3:37 PM