People Are Going Nuts for the Upcoming, "Batman," #89 and New Character Punchline 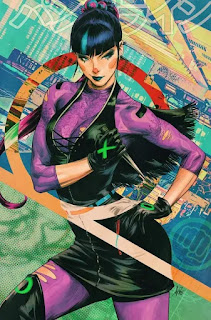 A comic that is not out yet already has people paying big-bucks on sites like eBay to people who claim they'll have extra copies. That comic is, "Batman," issue 89 which releases this Wednesday, February 19th, 2020. It features a one-panel cameo appearance by someone who is apparently going to be a new sidekick for the Joker and possibly a, "Girlfriend," in a sense hopefully better than the abusive relationship he held with Harley Quinn. Her name is Punchline and she has a decent character design, but that's about all we know.

I do not know if she'll be an interesting character as nothing has actually been released with her yet, people are just getting hyped and DC is eager to make her a new hot character too with her popping-up in many books after the cameo. The first full appearance will be within the pages of, "Year of the Villain: Hell Arisen," #3, and then she will feature in the 90th Batman issue and I imagine other books. Also, she'll be on the cover of, "Batman," #94, which is pictured above, and that might be her first cover appearance if I understand things correctly. We shall see if the excitement for Punchline is warranted or this ends up being a big false start. For now, my suggestion is to try and get a copy of, "Batman," #89 for cover price if you can because otherwise, you may have to drop $35-$40 to see what all the fuss is about.
Posted by David Charles Bitterbaum at 8:28 PM