New Comic Publisher, "Bad Idea," Knows You May Think Their Plans Are Crazy

A bunch of alums from the reborn publisher Valiant who left it after some corporate shake-ups are returning to the publishing field with their new company, "Bad Idea." It has a unique concept for a distribution model that could work or end up being a catastrophic failure. It's got people talking though, and when I got the PR email (which ComicsBeat has as well as their thoughts on all this) it sounded interesting and had parts where I went, "What?"

The interesting parts are that an assortment of talented creators have been working on some comics (Matt Kindt,  Marguerite Bennett, Jeff Lemire, and more) and these books will not be available digitally, will not have variants, and there are no plans for collected editions currently. The only way to get these will be to go to your comic stores which will be allowed to sell one copy of each comic per customer (I guess to prevent too much potential speculation with books). How can that rule be enforced, however? This publisher is going to sidestep the usual comic distributor (the reviled monopoly Diamond) and sell to direct to comic stores. This all sounds neat, but the part that made me go, "What," is this: Only 20 comic stores will be able to carry these books initially, up to 50 by the year's end. 20 comic stores, in the World. No online sales. How the Hell are people going to get these books without turning to eBay or something? 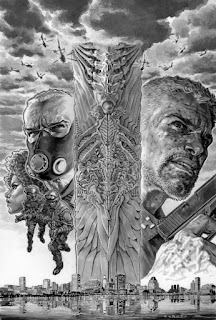 Assuming the comics are good people will want to buy at least some of them, and besides eBay/online marketplaces or pirating the books (which I don't approve of, but I mention as people sometimes do it) that will be all but impossible if they aren't among the lucky number in the World near a comic shop selling these books. Again, 20 stores, up to 50 by 2020's end. That ain't a lot for the entire Planet. If the books are good though, that will create demand and result in more buzz, however, I would think. There is some solid talent involved, but still...just 20 stores? I hope if there are a lot of sales of quality titles the distribution will expand quickly.

This is either a genius concept that will surprise folk with its success or is due to quickly fizzle out in horrendous failure. Most batshit crazy ideas tend to either have shockingly great results or astoundingly bad ones. Whether this works out or not it is crazy and the company practically is begging folk to call it out by naming themselves, "Bad Idea." It has us all talking, however, and they've got the capital to at least get this started (the Valiant alums involved possibly got bought-out from the company for a healthy chunk of change). More on all this as it develops.
Posted by David Charles Bitterbaum at 9:25 PM