Suddenly, I Am Interested In X-Men Schism AKA Quentin Quire Rocks

X-Men Schism, a book I was lukewarm on, and which had a four-issue mini-series prelude that accomplished nothing (I should get my review of that up) suddenly looks interesting to me. Why? Well, the preview pages I viewed via Bleeding Cool showed a neat political angle and what seems to be the return of a character Grant Morrison created who I've always had a soft-spot for, Quentin Quire, or Kid Omega! Observe: 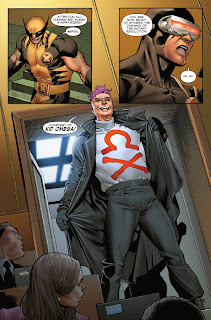 Oh yeah, I suddenly really want this book something serious mainly due to that single page. Thank you for using the not-often-utilized-enough Quentin Quire, Jason Aaron. Now just use him well as anyone who isn't Morrison seems  to screw the pooch trying to put him in a story.
Posted by David Charles Bitterbaum at 12:26 PM