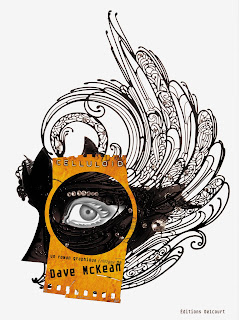 CelluloidI really enjoy the artwork of Dave McKean. He and Grant Morrison did a great job on Arkham Asylum (even though some people hate that story), Cages is snazzy, etc. I heard he had a new book coming out called Celluloid and figured it was about movies, that was all I knew. Then, I learn it has some controversy because it is an adults-only book that is arguably pornographic with its graphic depictions of sexuality. Well, this is definitely no-holds-barred in that sense, but I don't think I would say it is pornography because that would mean it has no artistic merit, and this is quite assuredly art. It's just really, really, explicit art that is  appropriate for grown-ups only most likely. Oh, and as it is McKean I was expecting it to be beautiful art-wise and it is that too. Let's discuss.

Basically the story is told with no words, just pictures. Even where characters speak we just see pictures in their word bubbles. It's kind of hard to describe what it is about, but basically a woman is drawn into a world made up of movie cells and proceeds to have a variety of sexual experiences. That makes it sound pretty simple, but each scene with the woman is illustrated in a completely different style resulting in incredible imagery. You have this really abstract scene, a photo-realistic scene, one that looks painted, drawn with pencil, etc. Dave McKean illustrates beautifully, , so on a purely aesthetic level of how the art looks, I would say this is amazing. The mixed-media stuff is especially neat too, like when pictures of fruit or objects are incorporated onto the page's image.