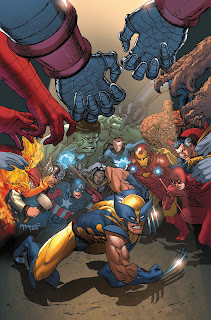 Marvel Universe VS Wolverine #1
I finally picked up a copy of this despite it being out for a bit, and enjoyed it a fair amount.

First off, a warning: You kind of need to have read Marvel Universe VS The Punisher to be able to fully understand this prequel-of-sorts. It isn't absolutely necessary, but it helps in regards to getting the maximum amount of enjoyment out of this comic.

Anyways, this tale takes place in an alternate continuity where a virus of sorts causes people to turn into flesh-hungry monsters, and in this series we see things through Wolverine's eyes. As this is a prequel to the Punisher series which took place after all the mayhem, it is interesting to see things as they actively develop into a full-blown catastrophic situation. Writer Jonathan Maberry does a good job writing Wolverine and its interesting to see points made about how heroes always overcome every big world-ending threat so its odd that this one time they can't when faced with a simple illness. There is also arguably an interesting parallel in a scene where it is discussed how the illness evolves people into monsters and how we the reader know of the X-Men as evolutionary steps forward--making one wonder if Maberry is making an allusion to how some think of mutants as monsters just as how the virus makes people actual beasts. 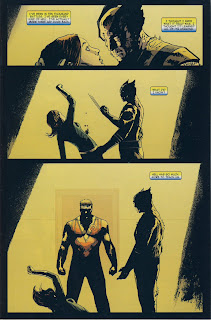 This was a good first issue and I look forward to the next three and where the series goes. It seems this will be about how Wolverine has to deal with the end of the world and that should be one heck of a ride.
4 out of 5 stars.
Posted by David Charles Bitterbaum at 6:20 PM