You heard me right, the solicits this month were so bad I no longer believe in humankind. Okay, maybe I do a little bit, but my faith was soundly shaken for awhile. 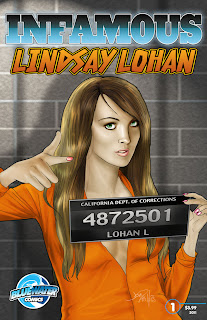 Pg. 246, Infamous: Linsday Lohan
Bluewater comics, just be hit by an asteroid or something already. 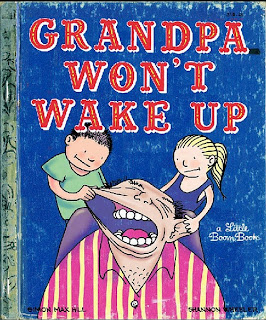 Pg. 256, Grandpa Won't Wake Up
I get it's a parody, and the art is by the same person behind "Too Much Coffee Man" which was a fun comic. But there is a fun dark parody and then there is just morbid and kind of gross. A comic about two kids who try to wake up their dead grandpa through various extreme means isn't really that funny, its just kind of weird. 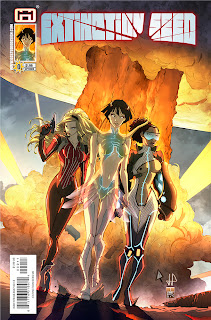 Pg. 289, Extinction Seed #0
Looking at the cover I thought two of the characters were nude or at least topless. I was wrong, but man if those outfits aren't designed to appeal to hormone-crazed teenage boys. You know what, wait. Maybe I'm being too hard on the comic here. Yes, the outfits are a bit absurd, but the idea of it being the 1960s and a countdown to a big extinction sounds sort of interesting, maybe this comic isn't just an excuse to draw women in compromising ways. What's that, you have some art from the comic? Do share: 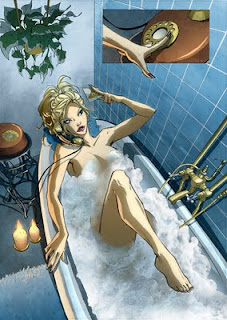 Yeah, I'm totally going to stand by my comment about this being nothing more than an excuse to draw nearly-naked women. 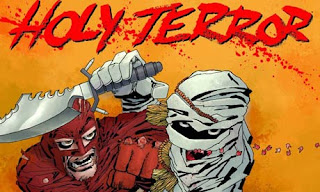 Pg. 292, Holy Terror
The Frank Miller book in the making forever. You may originally recall it was, "Holy Terror, Batman!" as a cute pun because it starred Batman fighting terrorists. However, I guess Frank Miller went too far off the deep end for DC Comics (which is saying something considering some of his stuff they've put out) and now a label I've never heard of called Legendary Comics is producing this. It's basically about a guy named The Fixer who fights Al Qaeda analogues. As this is Frank Miller you can expect it to be subtle, not to resort to stereotypes, and present a complex view of the issue of terrorism. Naw, I'm bullshitting you, this is going to be over-the-top, insane, and probably offensive as Miller has kind of gone crazy since doing his more thoughtful work earlier on.

I don't know, this may be good, but a part of me just expects it to suck because the last thing Miller did that I liked was Sin City. Dark Knight Strikes Again is just crazy, All Star Batman and Robin is purposely bad, 300 is eh, and etc. etc. At least with Sin City Miller went to his excess and it worked in an almost self-parody. Here? This is probably meant to be taken as deadpan and serious and I just probably can't do that. Terrorism isn't as simple as one man fighting some bad guys, it never was. 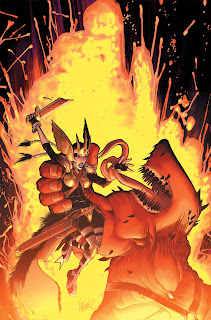 Marvel Book Pg. 4, New Mutants #31
Aw man, New Mutants is going great with the search for Nate Grey we have going on right now and then they have to tie-in with Fear Itself, which seems to just drag any series that it crosses-over with down in quality. Note: Invincible Iron Man is an exception, but it is also being written by the man behind Fear Itself so it has an advantage. Also, Alpha Flight is good, but that is launching out of Fear Itself, which is different than tying-in. Anyways, I anticipate this issue of New Mutants to be at least 1 star lower in enjoyment than the previous issue and any after (as long as they are Fear Itself-free). Unless of course Fear Itself suddenly starts getting really good with issue #4 coming out today, but I wouldn't count on it. 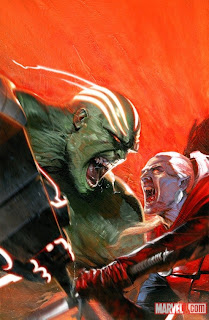 Marvel Book Pg. 10, Fear Itself Hulk VS Dracula #1
This is going to be a three issue mini-series, with the first two issues coming out in the same month. On what planet do we need this comic where the Green Hulk--who is running around empowered with a "chosen hammer" goes to the vampire nation (wherever the hell that is) and proceeds to fight Dracula for a three issue mini-series? Victor Gischler is writing this and he does some decent stuff with the vampires in the Marvel Universe, but three issues? Do we even need one? The answer is no. No we don't. 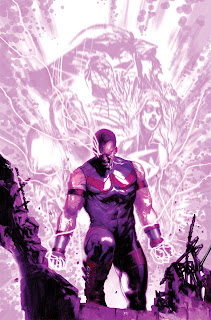 Marvel Book Pg. 30, New Avengers Annual #1
Alright, I have a few bones to pick with this comic here. My first is why is this a New Avengers Annual when Wonder Man has been appearing in the main Avenger's book saying how he wants to stop the Avengers from forming? My second complaint is why is Brian Michael Bendis writing Wonder Man so out of character lately in the Avengers books as this angry guy who says how the Avengers are a bad idea and he'll destroy them by any means necessary, whatever? That is just not like Simon Williams and it sounds very odd coming from his mouth considering how much he has loved the Avengers over all these years to suddenly do a 180 degree spin on the subject. My third and final objection is to the name of team Wonder Man puts together to stop the Avengers. It's called, "The Revengers." Really? Isn't that like something a high school student would come up with when he's trying to write a comic? We pay Bendis the big bucks and this is the best he comes up with? You know, the sad thing is I'm just sort of happy Wonder Man is even being used by anyone.

By this point you may have lost a belief in humankind too, don't worry, your faith will return in time.
Posted by David Charles Bitterbaum at 9:30 AM