Both Are Terrible, But One's Intriguingly Terrible--Fear Itself: Deadpool #1 AND Fear Itself: Fearsome Four #1 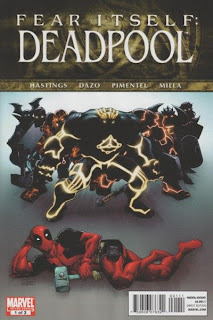 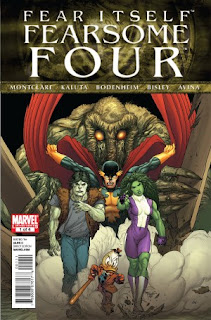 Fear Itself: Deadpool #1 AND Fear Itself: Fearsome Four #1
We've got two really bad comics here, but one is just dull and sucks, and other is fascinating while also being awful and just so odd. Deadpool is the dull one, Fearsome Four is the one that is weird. Let's discuss them.

In both comics things happen that make no plot sense. Why does Deadpool choose this Walrus villain and want to have him go to that town in Mexico that the guys working for him mentioned? Dunno. How did Deadpool get these guys in the first place that it seemed were normal contractors but coincidentally have something interesting to them? Not explained. Why is Deadpool....ugh, forget it.

Fearsome Four raises questions in the form of why Howard the Duck called up She Hulk other than the fact that the comic needed a random female to look tough? Again, dunno. How is Man Thing feeding of fear in the air from the news media or some absurd bull? Your guess is as good as mine.. Why does Nighthawk randomly pop up, and why does Frankenstein really randomly appear for no explained reason at all? No clue. Why did it take so many artists to do this with styles so different that it causes the comic to really conflict? Yeah, you think I'm going to be able to answer that after not knowing for the rest of the stuff? 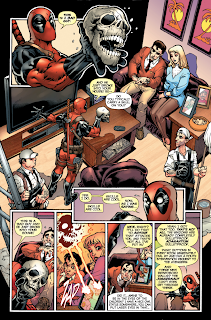 The thing is, Deadpool is just boring and not funny. Quite lame really. Fearsome Four however, is amazing in its terrible nature. The random art-switching, the utter lack of reason for these characters coming together, and the tonal shifts that occur. I mean, we get a scene with Nighthawk that seems like it is trying to do a bad riff off of Frank Miller's interpretation of Batman in a way so extreme even Miller would tell them to turn it down--and Frank Miller has never been one for subtlety.

Seriously, Nighthawk comes off like a total crazy-person, laughing manically at the muggers he attacks, doing an inner monologue so hard-boiled if it were an egg it would be hard as a rock, and just being odd. Then the way the art shifts for the last pages is beyond even the odd changes earlier in the comic which are jarring, but this is just out-there, when Man-Thing confronts our heroes and causes reality to collapse or something and warps everyone into a monster...I think. Seriously, this is a terrible, terrible, yet amazing to read comic. You should actually pick it up just to experience it and how utterly bizarre it is. 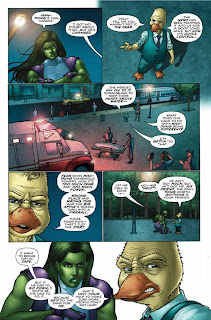 Fear Itself has lowered the quality of almost any book that ties-in to it, and it appears that some of the mini-series that are directly related to it are just awful. I can't comment on some of the other ones that have gotten slightly better reviews like Fear Itself: Uncanny X-Force, but these two comics are just atrocious. However, while that would normally mean you want to avoid both, I actually recommend you pick up Fear Itself: Fearsome Four #1 just to see how utterly insane the whole thing is.
1 out of 5 stars (both comics--but do get Fearsome Four to see the weirdness).
Posted by David Charles Bitterbaum at 5:48 PM