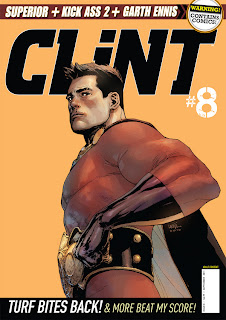 CLiNT #8
Mark Millar's comic-magazine with the title that comes this close to looking like an offensive word has a new issue out (although I think some copies have a slightly different bottom ad as the one I have mentions "Who is Jake Ellis" maybe its a US-UK thing). There are comics in it, but are they good? There is editorial content, but we already know that is going to be horrible. Anyways, like an old wooden shed, lets break it down...

We open with a really short bit from the new Kick-Ass comic. It was okay, and has a big plot thing at the end I would care about if I really read Kick-Ass anymore but I could barely read this just for you guys. Then we have an article about the, "10 worst political gaffes" ever that gets at least one thing wrong. Now, I hate Sarah Palin, but she never actually said she could see Russia from Alaska. She claimed that because she had been Governor of Alaska that gave her foreign policy experience since the nation was so close to Russia, and Saturday Night Live made that a joke with Tina Fey saying as Sarah Palin how she could see Russia from her house. In the actual Katie Couric interview however, Palin didn't actually say anything that idiotic, even though she says plenty of horribly stupid things. So yeah, of all her gaffe's you could have gone with you screw one up, CLiNT. Nice job. Then we have another entry by "Turf" which just wrapped up its single issues from Image, and that is always a good read. We've got another article about someone named Victoria Coren where CLiNT acts like it is sort of interviewing her, but they actually just gather quotes and write an article about the person. I told you, this magazine gets some good comics but the editorial content is atrocious.
After that we have the conclusion of the serialization of, "The Pro," which was a great comic about a sex-worker who gains super-powers that was written by Garth Ennis, illustrated by Amanda Conner and absolutely hilarious. Then we get a long excerpt of, "Who Is Jake Ellis," an intriguing comic that I quite enjoyed reading and which I heard has been popular in normal-comic form to a point where they expanded it from a shorter mini-series to a slightly longer one. After that is another long piece in the form of the comic, "Superior," by Millar himself, with issue three collected here. It's a fun enough read.
Basically you get various parts of some quality comics, be they concluding ("The Pro") just starting ("Who Is Jake Ellis") or currently going ("Turf"). I don't care for Kick-Ass and Superior is decent, but that's okay, and the articles are just horrible but luckily this issue there weren't many of them. This was a good issue, with some having less-than-great comics but this one turning in some pretty good stuff. Not bad for $6.99.
3.5 out of 5 stars.
Posted by David Charles Bitterbaum at 2:30 PM