The New Spider-Man Trailer is Leaking Like Nobody's Business--Update: Official Trailer is Out 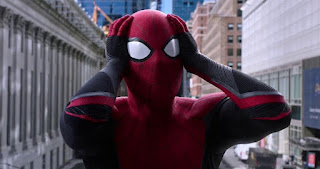 Update: See? That didn't take long at all! The official trailer is on Youtube in all its high-quality glory. I watched it and found it pretty intriguing!

There has been a huge hunger among fans for more information about the latest Spider-Man movie, "Spider-Man: No Way Home." A lot of hype has built up with little slips from people making it clear we're going to see characters from other Spider-Man movie dimensions. Hence, a very rough recording of what is apparently the legit trailer has leaked and folks are going nuts about it. I won't link to any videos of it because they are taken down as fast as they go up and I don't need Disney and Sony trying to sue my ass.

The trailer will most likely be officially released soon and be a lot easier to enjoy than via the grainy footage that is out there, so I'd recommend being just a tiny bit more patient and waiting for the official release. I'm waiting, at least, as I have not watched the footage. Then again, I'm not as huge of a Spider-Man fan as other folks and you know if a rough cut of footage from the, "Moon Knight," show leaked I would watch it, so at the end of the day, I'll admit I'm a hypocrite.

Posted by David Charles Bitterbaum at 11:46 AM