The New Trailer for, "Venom: Let There Be Carnage," Looks Suitably Entertianing 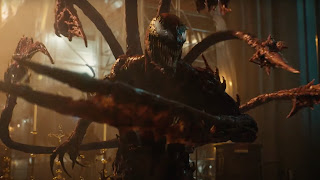 As many may recall, I thought, "Venom," would bomb and be terrible. It got decent-ish reviews and made a ton of money. I saw it and found it to be solid fun if for no other reason than Tom Hardy is a great actor. We've waited some time due to COVID-19 delays, but in September we'll get the sequel teased at the end of the first flick in the form of, "Venom: Let There Be Carnage." It'll feature Tom Hardy's Venom going up against Woody Harrelson's Carnage. If anyone were qualified to play a character as demented and weird as Carnage I think a skilled actor and quirky guy like Harrelson is ready for the challenge. The newest trailer has dropped and you can see it here:

It looks entertaining if for no other reason than Hardy and Harrelson are fun actors. The religious symbology that seems to pop up a bit in this trailer is interesting too and I'm not sure what kind of statement that is trying to make, but I definitely noticed it. Basically, we're getting more of a violent-yet-kinda-funny Venom and now Carnage is joining in the fun. I imagine it'll be watchable.