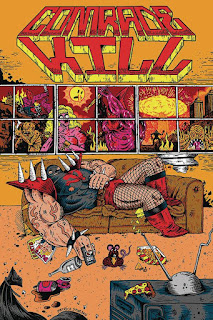 I mentioned in a previous post how Adhouse books will be closing in the future. However, before they close-up shop they are going to be doing some more releases. "Comrade Kill," is coming out in October and comic shops, as well as bookstores, can get copies preordered now. I had the chance to read an advance copy and I loved how relentlessly absurd, violent, and satirical this treat of a book is!

Written and illustrated by Patrick Sparrow, the titular Comrade Kill is a Soviet superweapon beyond compare. Capable of regeneration thanks to nanorobots as long as he keeps himself fed, it reminds me a bit of the Valiant character, "Bloodshot," but with a much more dark and funny edge. Comrade Kill awakes from cryostasis after many more decades than he would've expected. Now his plans for attacking America are greeted with confused shrugs as well as people pointing out his terroristic plans are now outdated. A chunk of the comic features Comrade Kill stuck in the Nevada desert as he plots all kinds of destructive acts towards America but ends up mostly fighting hideous mutants. Good times all around. 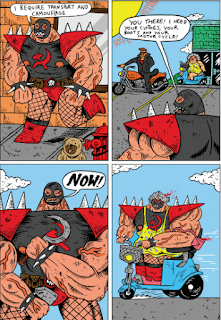 Sparrow's artwork reminds me a lot of the underground stuff from the 1970s and 80s (intentionally nasty and detailed in its excess) if it had a child with Johnny Ryan's comic, "Prison Pit." His style features huge and hideous humans/humanoids fighting each other in increasingly brutal ways whilst jokes are made that vary between cleverly political to just outright gross-out humor; it's a good disgusting-to-clever ratio though, so it works. Sparrow also leaves us on a clear cliffhanger as Comrade Kill's plans to ruin America remain as yet unfulfilled and a possible challenger prepares to enter the fray.

"Comrade Kill," is a funny and clever read with artwork that is impressively grotesque. Whether it is engaging in subtle political commentary or throwing out dick jokes, it is simply fantastic. Patrick Sparrow has created a stellar graphic novel and  I can't wait for another volume in the future if that suspense-filled ending is any indicator of more madness to come! I encourage you to ask your comic shop/bookstore/library to order a copy and once October arrives you'll be able to delve into the hilarity and madness!