The, "American Pickers," Drama Saddens Me 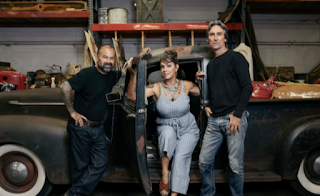 I am a 33-year-old Millenial but I love all a certain genre of shows old folks seem to adore. I am a huge fan of, "Antiques Roadshow," and, "American Pickers." Shows where people find old stuff and assign it a value are just a real treat to me (I'm not huge on, "Pawn Stars," as Rick is often just so curt). Therefore, I am sad to hear that there is behind-the-scenes drama. Apparently, one of the hosts/main pickers is leaving the show. Frank Fritz is done being a picker, at least for this program. Danielle--from the show--herself confirmed it.

For many seasons Mike Wolfe and Frank Fritz were picking. He wasn't in a lot of episodes recently due to back surgery and pretty much all the new episodes for this season have featured Mike and other people associated with the show picking. Frank has been mentioned and I just assumed he was dealing with more back issues or was too busy to be on a filmed pick. I hope everyone involved can walk away from this happy, but it is a bummer Wolfe and Fritze are not even on speaking terms now. I'll still eagerly watch, "American Pickers," but without Frank, it will be a bit of a different vibe.