That, "Chariot," Comic is a Great Read 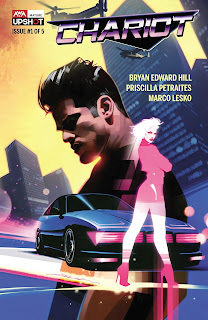 I consider friend of the blog Bryan Edward Hill to be a talented guy. He writes good comics ("American Carnage," was one of my favorites of 2019) and is really fun to talk to--as my interview with him shows. One of his latest comics, "Chariot," got some buzz when it was optioned after some issues came out, but movie-stuff aside, it is simply a fantastic comic. Published by AWA, it is written by Hill with art by Priscilla Petraites, "Chariot," is kind of like a sci-fi spy thriller meets, "Knight Rider," if the car were a female and didn't hesitate to kill people (bad guys though, the car isn't just blatantly homicidal).

Hill throws a ton of ideas on the wall in, "Chariot," and they, amazingly enough, all stick. You've got a down-on-his-luck ex-con struggling to get by, sisters dependent upon technology in different ways (one has become the car the other is like an organic-mech hybrid), a sick kid, lots of gunfights and car chases, and despite a lot of this stuff sounding a bit formulaic, Hill brings it all together in a way that feels fresh. It's like he takes a bunch of boilerplate ideas that are uninspired by themselves, but when all smashed together make a delicious stew of weirdness that pleases your palate. 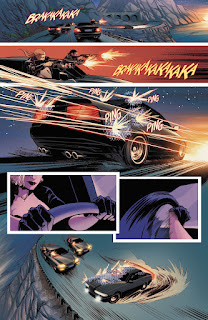 Plenty of praise must be given to Petraites as well. People will tell you that comic-books are difficult to really show car-related action in. She excels at making everything feel like it is truly in motion, however. Plus, with a mix of genres happening she doesn't miss a beat whether it's grounded or surreal imagery. She can draw everything from a dingy junkyard to a sleek and surreal computer-world, and both look awesome. There is no, "Clash," of style, everything just blends perfectly whether it's grimy gunfights or high-tech vehicles darting down roads.

"Chariot," was a five-issue mini-series and it hints that more volumes could be coming in the future. The book wraps-up some plot points but leaves other mysteries dangling in a tantalizing manner. I know after how much I enjoyed this (apparently first) volume of, "Chariot," I would be eager for more. Now we just need to see if the optioned adaptation will be as good as the comic!

5 out of 5 stars (for all five issues overall).